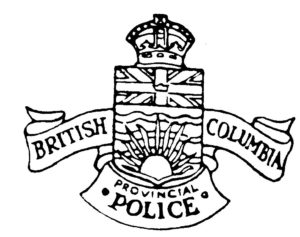 The British Columbia Provincial Police (BCPP) was the first law enforcement body west of the Great Lakes. First created as a Colonial Police Force under Governor James Douglas on November 19, 1858 it was intended to maintain law and order during the Fraser Gold Rush. At first there was only one policman to patrol the 360,000 square miles in the interior of the colony but eventually the force grew to 520 men.

BC Provincial Policemen brought law and order to the growing colony but they also collected liscense fees, reported on the weather, gathered statistics, checked cattle branding, tested new drivers, served court documents, and often performed the duties of prosecutors, jailers and prisoner escorts. After 1924 they wore uniforms of khaki and green and developed into one of the most modern and effective police organizations in the world.

At midnight on August 15, 1950 after 92 years of policing the province, the BCPP was absorbed by the RCMP. At this time most of its members traded their khaki uniforms for scarlet and gold and found the transistion a smooth one. The force has been commemorated by several plaques around the province and there is still an active Veteran’s Association operating today, but many British Columbians still don’t know much about this important organization which was such an integral part of the early history of B.C. We hope that this display will help keep its memory alive.